New results from an innovative cross-sectional clinical study of Veloi, BAT’s flagship modern oral nicotine pouch product, have been published today in Biomarkers Journal . In the study, consumers exclusively using Velo for over six months had significant favourable differences in several biomarkers of exposure and biomarkers of potential harm relevant to smoking-related diseases compared to the adults who smoked.

The study provides important new data and insights into the real-world health impact in Velo consumers compared to smokers, former smokers and never smokers. A single set of samples of blood, urine and other clinical measurements was tested for certain toxicants and a range of biomarkers thought to be linked to the development of diseases such as cancer and cardiovascular disease (CVD). 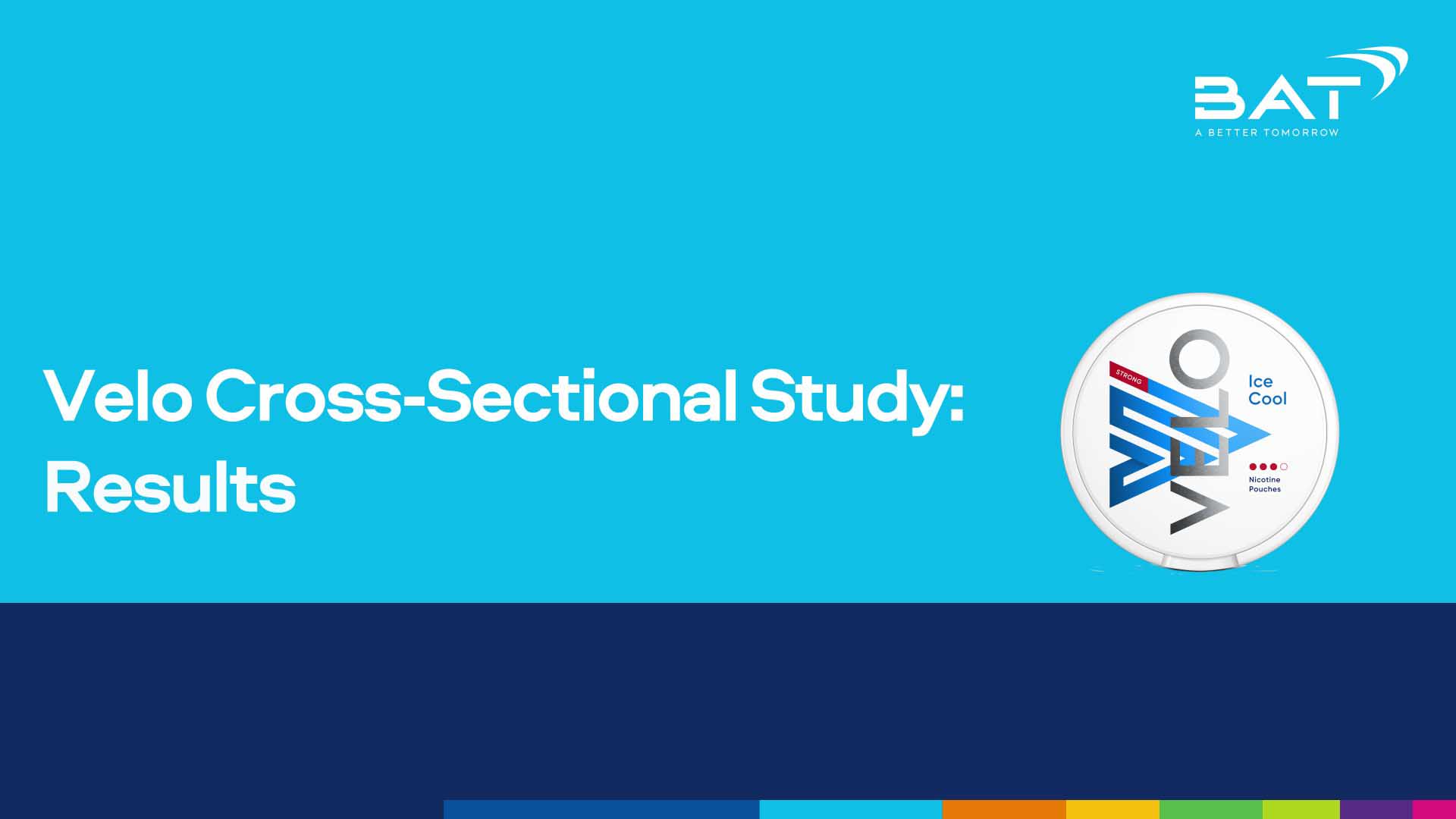 Dr David O’Reilly, Director, Scientific Research at BAT, said: “These results are very important for Velo and the modern oral nicotine product category. They build on the extensive scientific evidence, including epidemiological data, that already exists for oral tobacco and add to the weight of evidence that supports our belief that Velo is a reduced-risk*† product for smokers who completely switch from cigarettes as compared to continued smoking. We have already generated data that shows Velo has a toxicant profile better than snus and comparable to Nicotine Replacement Therapy (NRT)iii. These results add further evidence that supports the important contribution Velo can make to Tobacco Harm Reduction.

“I’d like to thank everyone who participated and helped deliver this study. It is another important step forward in our journey to building A Better Tomorrow.”

Based on the biomarkers measured, compared to smokers, Velo consumers who had been using the product exclusively showed:

The study included participants who had been using Velo exclusively for over six months, as well as current smokers, former smokers and never smokers. For the Velo consumers and current cigarette smokers, usage patterns and overall consumption were not controlled under the study protocol as the aim was to assess the impact among people using the products in their ‘normal’ way rather than in a controlled way. Four different groups were enrolled and studied.

Participants were based in Denmark and Sweden, aged between 19-55 years old, and in good general health.

Unlike longitudinal studies where participants attend multiple clinic visits over an extended period of time, participants in this study made a single clinic visit where samples of blood, urine and breath were collected, and other clinical measurements were performed. These samples and measurements were then assessed for biomarkers of exposure (to selected toxicants) and biomarkers of potential harm. Differences in the biomarker levels between the groups were compared and analysed.

In addition, to ensure compliance with reported product usage, the Velo and former smoker groups were tested for the biomarker, CEVal, to indicate whether or not they had smoked cigarettes during the preceding six months.

* Based on the weight of evidence and assuming a complete switch from cigarette smoking. These products are not risk free and are addictive.
† Our products as sold in the US, including Vuse, Velo, Grizzly, Kodiak, and Camel Snus, are subject to Food and Drug Administration (FDA) regulation and no reduced-risk claims will be made as to these products without agency clearance.

This press release is not intended as a piece of promotional material for any products, very notably in the US where claims of a certain type are subject to FDA clearance. This update relates to new scientific data and is not aimed at a specific market. It is intended to provide further scientific evidence to underpin our products.

This release contains certain forward-looking statements, including "forward-looking" statements made within the meaning of the U.S. Private Securities Litigation Reform Act of 1995. These statements are often, but not always, made through the use of words or phrases such as "believe," "anticipate," "could," "may," "would," "should," "intend," "plan," "potential," "predict," "will," "expect," "estimate," "project," "positioned," "strategy," "outlook", "target" and similar expressions. These include statements regarding our customer target ambition, New Categories revenue targets and our ESG targets.

All such forward-looking statements involve estimates and assumptions that are subject to risks, uncertainties and other factors. It is believed that the expectations reflected in this release are reasonable but they may be affected by a wide range of variables that could cause actual results to differ materially from those currently anticipated. A review of the reasons why actual results and developments may differ materially from the expectations disclosed or implied within forward-looking statements can be found by referring to the information contained under the headings “Cautionary Statement” and "Group Principal Risks " in the 2021 Annual Report and Form 20-F of British American Tobacco p.l.c. (BAT).