The full results, which were published in Internal and Emergency Medicine  i, build upon the favourable changes reported  at three and six-months. The improvements observed were sustained over the 12 months of the study, adding to the weight of evidence that supports glo as a less risky* alternative for adult smokers who would not otherwise quit. ii,iii

Dr David O’Reilly, Director, Scientific Research at BAT, said: “The results from this study are the most important data we have ever generated about glo and for the THP category in general. This real-world study allows us to assess the changes that adult smokers switching exclusively to glo experience, by assessing early indicators of potential harm associated with disease development. It provides much needed new evidence about the size of the change and durability of the effect switching completely to glo can have, and reinforces glo’s potential as a reduced-risk product*.

“I’d like to thank everyone who participated in and helped deliver this study. It is another important step forward in our journey to building A Better Tomorrow.” 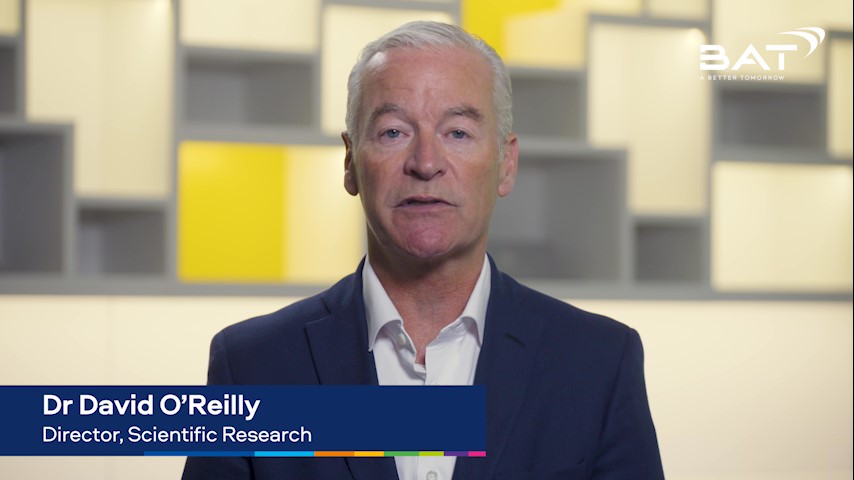 Based on the early indicators of disease measured, smokers who switched completely to glo instead of continuing to smoke showed:

These new data build on the findings of another recent publication about glo[iiii], which concluded that “given the accumulated scientific data, glo is a reduced exposure product compared to combustible cigarettes and is reasonably deemed to reduce the risk of smoking-related diseases and supports the conclusion that smokers who switch entirely to THP glo use, will reduce their relative risk of developing smoking-related diseases as compared to continued smoking.”

Participants in this year-long randomised controlled study were UK-based smokers aged 23 to 55 in good general health. The smokers who did not intend to quit were randomised to either continue smoking cigarettes or switched to using only glo, while smokers who indicated they wanted to stop smoking were offered nicotine replacement therapy and access to a cessation counsellor. A group of ‘never smokers’ was also included to act as a control group and continued not to use any tobacco or nicotine products.

This study was designed to explore the risk reduction potential of glo when used in a real-world setting rather than in a clinical setting. Participants were required to attend monthly clinic visits, where samples of blood, urine and other measurements were taken. These samples were tested for “biomarkers of exposure” (to selected cigarette smoke toxicants) and “biomarkers of potential harm”.  In addition, to ensure those in the study who had stopped or switched were not also using cigarettes, the glo and cessation groups were tested for the biomarker, CEVal, which can indicate if they have smoked cigarettes.  Those who tested positive continued to participate in the study, and the final results were divided into the total population and a subset who were CEVal compliant, which ensured the results accurately reflect the impact of completely switching.

BAT is a leading, multi-category consumer goods business with a purpose to build A Better Tomorrow™ by reducing the health impact of its business through offering a greater choice of enjoyable and less risky products for adult consumers.
The company continues to be clear that combustible cigarettes pose serious health risks, and the only way to avoid these risks is not to start smoking or to quit smoking. BAT encourages those who would otherwise continue to smoke to switch completely to scientifically-substantiated, reduced-risk alternatives*† . In order to deliver this, BAT is transforming into a truly consumer-centric multi-category consumer products business.

BAT’s ambition is to have 50 million consumers of its non-combustible products by 2030 and to generate £5billion of New Categories revenue by 2025. BAT has set stretching ESG targets including achieving carbon neutrality for Scopes 1 & 2 by 2030 and eliminating unnecessary single-use plastic and making all plastic packaging reusable, recyclable or compostable by 2025.
BAT employs over 52,000 people and operates in over 175 countries. The BAT Group generated revenue of £12.87 billion in the first half of 2022 and profit from operations of £3.68 billion.

The company’s Strategic Portfolio is made up of its global cigarette brands and a growing range of reduced-risk*† New Category tobacco and nicotine products and traditional non-combustible tobacco products. These include vapour, tobacco heating products, modern oral products including tobacco-free nicotine pouches, as well as traditional oral products such as snus and moist snuff. In the first half of 2022, we had 20.4 million consumers of our non-combustible products, a rise of 2.1 million on full year 2021.

* Based on the weight of evidence and assuming a complete switch from cigarette smoking. These products are not risk free and are addictive.

† Our products as sold in the US, including Vuse, Velo, Grizzly, Kodiak, and Camel Snus, are subject to Food and Drug Administration (FDA) regulation and no reduced-risk claims will be made as to these products without FDA clearance.

This release contains certain forward-looking statements, including "forward-looking" statements made within the meaning of the U.S. Private Securities Litigation Reform Act of 1995. These statements are often, but not always, made through the use of words or phrases such as "believe," "anticipate," "could," "may," "would," "should," "intend," "plan," "potential," "predict," "will," "expect," "estimate," "project," "positioned," "strategy," "outlook", "target" and similar expressions. These include statements regarding our customer target ambition, New Categories revenue targets and our ESG targets.

All such forward-looking statements involve estimates and assumptions that are subject to risks, uncertainties and other factors. It is believed that the expectations reflected in this release are reasonable but they may be affected by a wide range of variables that could cause actual results to differ materially from those currently anticipated. A review of the reasons why actual results and developments may differ materially from the expectations disclosed or implied within forward-looking statements can be found by referring to the information contained under the headings “Cautionary Statement” and "Group Principal Risks " in the 2021 Annual Report and Form 20-F of British American Tobacco p.l.c. (BAT).