Behind the Microscope - Simone Santopietro 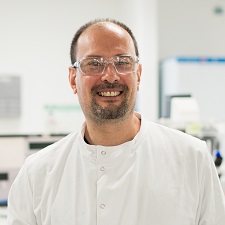 Science and innovation are the foundation of building A Better TomorrowTM, and at BAT we understand the importance of investing in the 1,500 R&D specialists who are helping us to deliver our purpose. We pride ourselves on our ability to recruit world-class scientists who can design and carry out industry-leading research, but we also have a proven track record of identifying and developing scientific talent from within, across all levels of our business.

To mark British Science Week (5-14 March), we spoke to accountant-turned-biologist Simone Santopietro to learn more about the surprising and inspiring scientific journey he has pursued working at BAT. In the second of our Behind the Microscope series, Simone, who works in the Human Consumer Behaviour Studies team, reveals why it is never too late to pursue your dream.

An early passion for biology
Growing up in Italy, Simone’s first love was always science and there was one show on TV that kickstarted his fascination. “When I was a teenager there was a popular science series called Quark. It was my favourite programme and I never missed an episode. I was learning so much and I already knew at that time that science, and in particular human biology, was my real passion.”

But when Simone was thinking about the kind of job he might like to do, he was told science was not an option. “At that time in Italy it was very difficult to find work and people said you would only get a job if you studied Economics, Engineering or Law. I got a degree in Economics and worked in finance for a few companies in Italy, including BAT. Then in 2008 I had the opportunity to transfer within BAT to Southampton, where the company’s global R&D hub is based. I was keen to leave Italy, as I wanted to see more of the world, and I thought it would help my career to work in a new country, so I decided to come to the UK.”

Rediscovering a love for science
For the next two years, alongside his work for BAT, Simone continued his financial studies, completing a course to qualify as an accountant in the UK. But as soon as he had finished, he made himself a promise that changed his life. “I told myself this was going to be the last time I would study accountancy. I was already in my thirties, and, from now on, I was going to do something I was really passionate about. It’s so important you enjoy your job because it’s what you will be doing until you retire. That’s why I chose to study for a Biology degree with the Open University and it was the best decision of my life.”

For the first year of his degree, Simone was working in finance during the day and studying biology at night. He then made contact with the person who was Head of Biology at the time to ask for advice on how he could get a job in R&D. “I told her my story and while she couldn’t promise me anything, she offered to show me what they did. From then on, I would spend some of my lunchtimes with scientists in the lab and they kindly showed me the kind of research they were doing. I remember one time watching them taking cells out of liquid nitrogen, and I was amazed.”

An introduction to world-class research
When a job vacancy for a Lab Technician appeared, Simone knew this was his opportunity. “Getting the chance to work as Lab Technician in R&D meant I had started on the path to becoming a scientist which was amazing. I then moved on to a few other positions with the Biology Department, where I was involved with a wide range of projects, including studies comparing the levels of toxicants of our New Category Products with those in cigarettes. This was really important work because it gave me the chance to help substantiate the reduced risk potential of our New Category Products and contribute to tobacco harm reduction.”

In February 2020, Simone moved to the Human Consumer Behaviour Studies team where he now runs some of his own studies. “The work I’m doing now is really fascinating. I get to study the behaviour of our consumers, finding out more about how they use our products, for instance how they vape. One project I’m currently involved in relates to devices that can be attached to our vapour products, such as the ePod to measure how people use them. This kind of information is important because these insights allow us to tailor our products to our consumers’ preferences, while ensuring they are of the highest standards. The better we get at doing that, the more likely consumers are to switch to potentially reduced risk products and help us deliver BAT’s purpose of building A Better TomorrowTM.”

While Simone has now finished all of the exams for his Biology degree, he still has to complete his final project and he is very grateful for the support he has had from BAT. “This company has been amazing throughout the whole of my degree, as they have given me study leave on top of my holidays, which I’m so grateful for and my Line Manager has even given me permission to allocate a small percentage of my working hours to my final project. It’s really tough doing a degree when you have a full-time job, especially when it’s not in my first language, but BAT has helped me the whole way through the process. I couldn’t have asked for more.”

Reflecting on his life-changing decision to move from accountancy to science, Simone is very happy he took that leap. “I love my job as a scientist because there are new challenges every single day. Constantly having new problems to solve can be tiring, but I always get to do different things. You never get bored as a scientist, it’s impossible. There’s always a new product or a new way of doing things and you constantly need to reinvent yourself. This is challenging and stimulating but I’m so glad I get to be part of this amazing organisation while doing something I love.”

Our people are our greatest strength and we are committed to supporting their development as they work to help us build A Better TomorrowTM.