Chemical analysis has revealed no detectable difference between the vapours produced by an e-cigarette (Vype ePen) and a novel hybrid device, containing tobacco (iFuse). 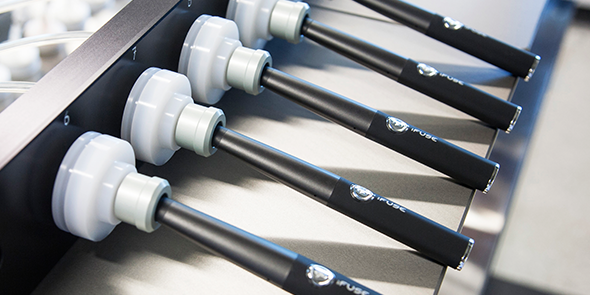 Previous research revealed that the levels of nearly all tested toxicants in Vype ePen vapour are much lower than in cigarette smoke. The Royal College of Physicians is among those who say that smokers should switch to e-cigarettes to reduce harm and help them quit smoking. However, some consumers say that they want more tobacco taste.

To remedy this, researchers at British American Tobacco have created a hybrid device, iFuse, that combines the workings of an e-cigarette with a tobacco component. This device heats tobacco, rather than burning it.

An e-liquid is heated and a vapour is produced that passes through tobacco. Although the tobacco is only gently heated (around 35ºC) by the vapour, this is sufficient to release the tobacco flavour.

Consumer testing revealed that this produces a great tasting vapour. Analysing the general vapour composition using non-targeted chemical screening, the scientists could find no significant difference between the vapours generated by the novel hybrid tobacco product and the tobacco-free control product (Vype ePen).

iFuse vapour was also assessed for some known cigarette smoke toxicants and substances formed by electronic vaping products, and compared to the control Vype ePen, a reference cigarette (Kentucky 3R4F) and air blanks.

Many in the public health community believe e-cigarettes offer great potential for reducing the projected public health impact of smoking. Public Health England, an executive body of the UK Department of Health, published a report saying that the current expert estimate is that using e-cigarettes is around 95% safer than smoking cigarettes.