Understanding vaping behaviour is an essential first step towards understanding how vaping products are being used by consumers and the potential they may have to reduce harm caused by smoking.

In the largest study of its kind, scientists from British American Tobacco and Nicoventures have developed a test to examine vaping behaviour, and then applied it to inform their studies on e-cigarettes.¹ 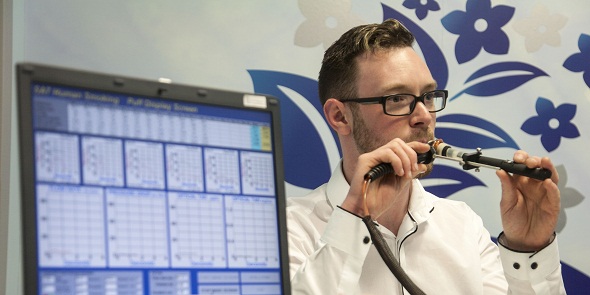 By examining vaping behaviour data, scientists can programme vaping robots in the laboratory so that they effectively mimic ‘real world’ use when a product is being tested. This means that machine testing of e-cigarettes is more accurate and gives more realistic, ‘true to life’ results. These tests help determine whether e-cigarettes emit, and therefore potentially deliver, fewer toxicants than conventional cigarettes.

The test used in this study is based on Smoking Analyser (SA7) technology, which was initially developed to measure smokers’ puffing behaviour. This is a small, portable device that can be used to measure pressure and flow and can provide information such as the size and length of a puff, as well as the time between puffs.

Using a modified version, two types of e-cigarette were tested: a rechargeable Vype ‘cig-a-like’ device, and a Vype ePen, which is a larger, enclosed button-activated device.

Sixty current e-cigarette users, aged between 21 and 64 years, participated in the study and attended the testing location on two separate days. They were provided with test products that they could then use as they wanted.

‘Puffing behaviour was slightly different for the two groups tested,’ said Dr James Murphy, Head of Risk Substantiation at British American Tobacco.  Average session lengths were similar, 6min 54 seconds for users of the disposable device and 7 min 41 seconds for users of the larger device. On average, users of the larger device took fewer puffs but of larger volumes (16 puffs, 83mL) compared to 21 puffs of 52mL.  There was variability across populations for each device so the results represent an average of behaviour.

The test described here forms part of a framework of tests used in the assessment of next-generation products (NGPs). These tests are part of a product stewardship process designed to support the safety and quality of NGPs in development.
There are currently no standardised testing protocols for measuring the emissions of e-cigarette aerosols, however, understanding how e-cigarette users vape on their products may help us in changing that.

The results from this study are published in Scientific Reports.