In each test, Vype ePen, a commercially available e-cigarette, produced the same results as an untreated control – there was no activity

A series of cell-based tests developed to compare the biological impact of cigarette smoke with e-cigarette vapour revealed no activity in cells exposed to vapour from Vype ePen, a commercially available e-cigarette.  In contrast, when the cell culture systems were exposed to cigarette smoke, they exhibited a series of responses including stress responses, DNA damage and cellular transformation, depending on the assay used.

The use of these tests to assess the biological impact of e-cigarettes was reported by scientists from British American Tobacco at the annual meeting of the Society of Toxicology in New Orleans today.

‘The results of these tests show that toxicity and biological activity is unaffected by the vapour from the e-cigarette tested, Vype ePen,’ said Dr Kevin McAdam, Head of Next Generation Product (NGP) Research at British American Tobacco.  ‘These tests are part of a suite of tests  being developed to test novel tobacco and nicotine products and could be used to help develop standards for these products in the future,’ he said.

E-cigarette vapour can contain nicotine, humectants, flavourings and thermal degradation products, so it is important to understand the potential impact on biological systems.

A number of tests were used to compare the biological impact of cigarette smoke and e-cigarette vapour: cell stress tests, looking at the production of intracellular antioxidants, free radicals and inflammatory markers; assessment of DNA damage, which can set the scene for cancer; and a transformation assay, which measures the transformation or conversion of normal cells into a cancerous cell phenotype. 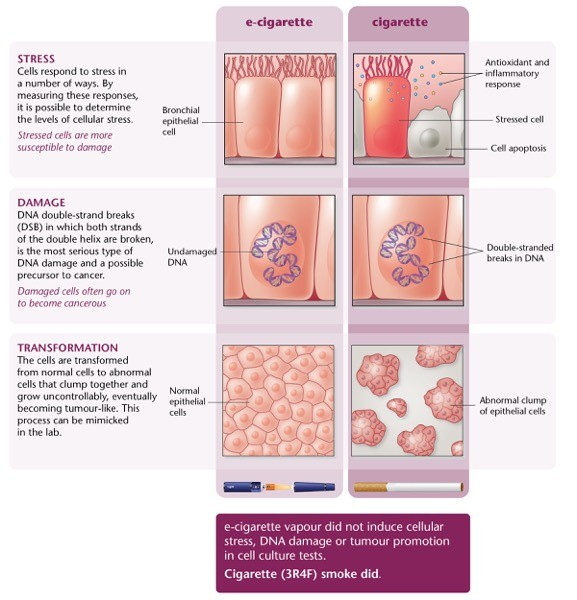 By measuring the levels of the various compounds produced and the level of cell apoptosis/death, it is possible to determine the levels of cellular stress.

Cellular DNA can become damaged by exposure to toxicants, especially when stressed. DNA double-strand breaks (DSB) in which both strands of the double helix are broken, is the most serious type of DNA damage. This is a possible precursor to cancer and potentially lethal to the cell.  The cell attempts to repair the DNA damage by modifying the histone or protein around which the DNA is wrapped.  The changes observed in this histone can be used as an indicator of the level of DSB.

When this test was used to compare the impact of conventional 3R4F reference cigarette and Vype ePen on DSBs, the results showed that cigarette smoke induced significant DNA damage in human lung cells. This was dose dependent, that is, the higher the dose, the more DNA damage was induced.  E-cigarette vapour produced no affect, even when the dose used was 15 times higher than the equivalent smoke exposure.

Damaged cells often go on to become cancerous. The cells are transformed from normal cells to abnormal cells that clump together and grow uncontrollably, eventually becoming tumour-like.  This process can be mimicked in the lab by using cells that are already damaged and testing the tumour-promoting activities of different compounds.

In this case, the cell culture system was used to test the ability of conventional 3R4F reference cigarette and Vype ePen to promote tumour formation in a specialised cell type called Bhas 42.

After exposure to reference cigarettes, the layers of cells were seen to become transformed, clumping together to create colonies, suggesting  that the smoke is a tumour promoter. By contrast, the e-cigarette produced no activity.

In each test, the e-cigarette produced the same results as an untreated control – there was no activity.