A new study shows that the daily exposure to formaldehyde from three different types of e-cigarettes is well below the levels considered safe by the World Health Organisation (WHO) – at less than a sixth of the indoor air quality standard.

‘In cigarette smoke, most formaldehyde is produced as the result of burning sugars naturally present in tobacco as well as added sugars and glycerol,’ explains Dr Sandra Costigan, Principal Toxicologist for electronic cigarettes at British American Tobacco, ‘whereas in vaping products, it is generally produced as a thermal breakdown product of glycerol and propylene glycol (PG). ‘Glycerol and PG are used to make the e-liquid and dilute the nicotine and flavouring’.  There has been a lot of material published recently on the amount of formaldehyde released from electronic cigarettes.

Formaldehyde is classified as a carcinogen by the International Agency for Research of Cancer and is thought to contribute to the development of tobacco-related disease.  For this reason, there has been some concern over the possible health effects of inhaling formaldehyde released into the aerosol of e-cigarettes.

‘In this study, we measured the formaldehyde produced in the aerosol of three different e-cigarettes formats (1),’ Costigan said. Three types of vaping products were studied: a rechargeable ‘cig-a-like’ device; a refillable open tank system, also called a clearomiser, and a closed modular system with variable voltage. Where there was a choice, the products were tested under worst case, high voltage conditions, under which the most formaldehyde would be produced. 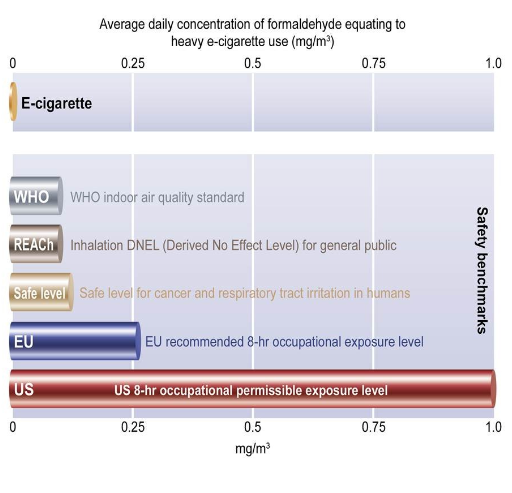 Consumer use of the products was surveyed to establish real world use patterns. A total of 350 puffs per day represents a realistic estimate of the intense use for these products.

Lab-based vaping robots were programmed so that they produced vapour in a realistic way and the formaldehyde levels in this vapour were measured.

The results showed that even the worst case amount of formaldehyde per 10 puffs of the e-cigarettes tested, was over 10 times less than the formaldehyde from a 3R4F reference cigarette smoked under standard ISO conditions.

Using 350 puffs per day, and assuming a standard breathing volume of 20m3 over 24 hours, average daily formaldehyde concentrations were calculated for the different products. For all products, these were well below a variety of formaldehyde safety benchmarks such as the threshold for throat and respiratory tract irritation, the European REACh Derived No Effect Level, occupational exposure guidelines, and the WHO guidelines for indoor air quality for selected pollutants which includes a guideline on formaldehyde levels.

‘We believe e-cigarettes hold great potential for reducing tobacco-related disease.  For this reason, we continue to strive to better define and further reduce any residual risks that there may be, to as low a level as possible,’ said Costigan.  ‘The results from this study show  that even heavy use of these products still only results in daily formaldehyde exposure that is less than one sixth of the exposure from breathing indoor air that complies with WHO air quality standards,’ she said.