We have shown in our first clinical study of our novel prototype cigarettes that it is possible to reduce smokers’ exposure to certain smoke toxicants. 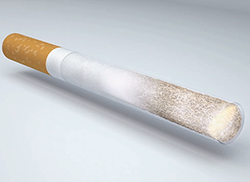 The only way to be certain of avoiding the risks of smoking is not to smoke. And reducing the health risks of smoking has been the overriding aim of tobacco research for many years. It is known that the risk of developing smoking-related disease is greater in people who smoke more cigarettes per day and for longer periods.

“There are already tobacco and nicotine products available, such as snus and e-cigarettes, that are known to pose substantially lower risk than cigarettes. And we don’t know whether it will be possible to scientifically prove that reduced toxicant cigarettes reduce health risks,’ said Dr David O’Reilly, Group Scientific Director at British American Tobacco. ‘But,’ he said, ‘we believe reducing smokers’ exposure to cigarette smoke toxicants continues to be an important research objective, given the numbers of people who smoke and the numbers who are likely to continue to smoke for the foreseeable future.’

‘Many more scientific studies and tests, some of which are still being developed, will be required to determine whether the use of these technologies is likely to result in products posing lower health risks. In the meantime, and in the absence of sufficient scientific proof, we need to engage with the external regulatory and scientific communities to determine if and how toxicant-reducing technologies should be applied to existing commercial products and how this can be supported by regulation,’ he said.

The prototype cigarettes incorporate several toxicant-reducing technologies: two related to the tobacco and two in the filter. A tobacco-processing technique employs an enzyme to remove proteins and polyphenols that become toxicants when burned. An inert tobacco substitute containing calcium carbonate and glycerol was also added, which dilutes the smoke.

The filter technologies include a resin that filters out aldehydes produced as a result of burning sugars in the tobacco and a novel activated carbon with an internal nanostructure optimised for trapping certain volatile smoke toxicants.

We have combined these technologies in three different test cigarettes and demonstrated using smoking machines in the lab that all three test cigarettes substantially reduced levels of certain toxicants compared with conventional cigarettes. 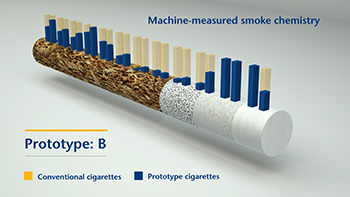 A six-week single-centre, single-blinded, randomised controlled switching study (Trial Registration Number, ISCRCTN72157335) with occasional clinical confinement was conducted in Germany. A total of 300 healthy adult subjects were recruited into the study, 250 smokers and 50 non-smokers. The latter acted as a comparison group to determine exposure to some of the studied toxicants that stem from dietary and environmental sources.

Recruited smokers were randomly assigned to a control or test group, with approximately 50 per group. All smokers smoked a control product for two weeks and at day 14 baseline measurements were made. Control group smokers continued to smoke the control product for a further four weeks, while test group smokers were switched to a test cigarette for four weeks. In each case, urine and saliva samples were taken and measurements were made of certain chemical compounds called biomarkers of exposure. They can be the toxicants themselves or their metabolites.

Generally, the higher the levels found in urine and saliva, the greater the exposure to the toxicant, depending on individual metabolic differences. The non-smoker group provided an indication of background levels of biomarkers. These measurements were made at two and four weeks from the switch.

‘In conclusion, this study showed that smokers switched to test cigarettes with reduced levels of certain toxicants in lab tests did get correspondingly reduced exposures,’ says Dr Chris Proctor, Chief Scientific Officer. ‘However, not all toxicants were reduced, and we do not yet know what level of reduction will be required to give a meaningful reduction in health risk. But these results provide the impetus for us to conduct additional further longer-term studies and to develop biomarkers more relevant to biological effects.’