Scientists at British American Tobacco used a method called the Ames test to compare the mutagenic potential of cigarette smoke with that of vapour from Vype ePen, a commercially available e-cigarette. DNA mutations result in genetic instability, which may be involved in the development of cancer. 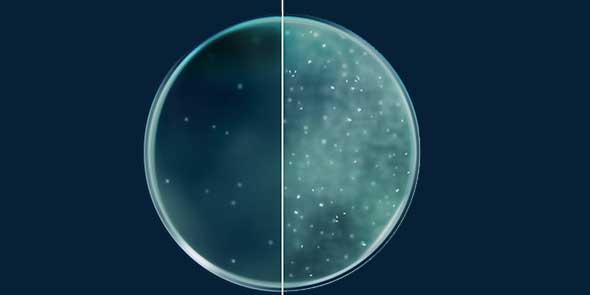 The Ames test is widely used method that uses bacteria to test whether a given chemical or drug causes mutations in the bacteria's DNA. The standard test involves five bacterial strains. In this study, two of these bacteria were used Salmonella typhimurium strains TA98 and TA100, both of which are effective at screening 90-95% of potential mutagens. TA98 and TA100 have been used widely to assess tobacco smoke, but never for the assessment of freshly generated e-cigarette aerosols, until now.

Traditionally, the particulate matter in smoke is assessed, but this is only a small fraction of the tobacco smoke. To more accurately reflect real-life exposure, whole smoke was also tested. In all, the researchers tested both the particulate matter and whole aerosol of smoke from a reference cigarette 3R4F and vapour from Vype ePen.

Exposure to smoke was seen to cause mutations in both bacterial strains in a dose-dependent manner - the higher the dose, the higher the mutation rate. Whole smoke took just 24 minutes to cause mutations. E-cigarette vapour extracts, gave no response, and whole vapour did not cause the bacteria to mutate, even after three hours of continuous exposure, which was comparable to the results obtained from air and untreated controls.

'These findings suggest that Vype ePen vapour does not induce the mutations observed on exposure to smoke,' said Dr James Murphy, Head of Reduced Risk Substantiation at British American Tobacco. 'This study adds data to support the growing evidence base that e-cigarettes have the potential to be significantly less harmful compared to cigarette smoke, though more research is needed' he said.