Top scientists from BAT headed to Maryland, USA to present new research at the Society of Toxicology (SOT) Annual Meeting.

The SOT  is a US-based professional association “dedicated to creating a safer and healthier world by advancing the science and increasing the impact of toxicology”. The annual meeting is a popular 3-day event showcasing the latest advancements in the field of toxicology.

Dr Emmanuel Minet presented new data  using the method described in a recent gene expression paper   by Banerjee et al. (2017). The study compared the transcriptional response of a primary 3D airway model after acute exposure to e-cigarette aerosol and test cigarette (3R4F) smoke. This data indicates that e-cigarette vapour has limited or no impact on transcriptional regulation, the mechanism by which cells regulate the conversion of DNA to RNA, when compared to smoke from a reference cigarette (34RF) in the tests conducted. 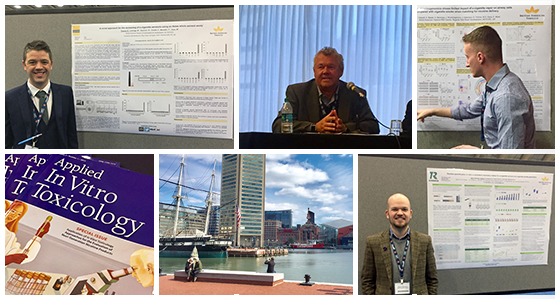 A novel approach   for the mutagenic screening of e-cigarette aerosols was proposed by Dr David Thorne, whose poster went on to be recognised as ‘most popular’ of those presented that day. In contrast to cigarette smoke, e-cigarette aerosols remain relatively poorly characterised in vitro, with more research needing to be done to fully understand their potential to offer reduced risks as compared to conventional cigarettes.

The approach, outlined in a recent article , involved testing e-cigarette vapour using an Ames assay, a widely-used test to assess the mutagenic potential of a given chemical or substance. Negative responses were observed in both strains tested with e-cigarette vapour, indicating there was no mutagenic activity for the undiluted test e-cigarette aerosol under the test conditions.

BAT were involved in four collaborative posters, including two posters with R.J. Reynolds on the use of microfluidic devices  and skin sensitisation assays   in e-cigarette assessment. Other collaborations included a poster  with Philip Morris International (PMI) on our award-winning Adverse Outcome Pathway (AOP) work , as well as a poster  based on our recent nicotine quantification paper  with Zhengzhou Tobacco Research Institute (ZTRI) in China.

Copies of the recent special issue   of Applied In Vitro Toxicology (AIVT) were distributed throughout the event, showcasing cutting-edge science on the in vitro evaluation of next-generation nicotine products. The issue, guest edited by BAT’s Dr Marianna Gaça, contained ten original articles, including the AOP  and nicotine quantification   research on which two of BAT’s collaborative SOT posters were based upon.

The special issue also contains a roundtable discussion   between some of the world’s most respected thought leaders on in vitro alternatives that explores the challenges and opportunities in harnessing 21st century in vitro toxicology testing methods for assessing e-cigarettes. The same expert panel, including Dr Chris Proctor, Chief Scientific Officer at BAT, reunited at the SOT Annual Meeting for a follow-on discussion hosted by the Institute for In Vitro Sciences (IIVS) . The session attracted around 70 attendees, 40% more than anticipated, and gave audience members an opportunity to engage directly with these important experts.