New research shows that e-cigarettes are as effective at delivering nicotine as conventional cigarettes, especially when used by experienced vapers.

'Our results tell us that newer generation e-cigarettes are more effective at delivering nicotine than first-generation e-cigarettes. But, smokers need to be able to adapt their behavior in order to use them to best effect, at least with currently available products,' says Dr Ian Fearon, Head of Clinical Research at British American Tobacco.

'Being as effective as cigarettes at delivering nicotine in important,' adds Dr Mitch Nides, because he says, 'it could be a factor in determining whether smokers are likely to continue to use e-cigarettes in place of regular cigarettes.' Nides, a veteran researcher in smoking cessation, is president of Los Angeles Clinical Trials, a US-based company that collaborated with BAT on this study.

The results are published in the American Journal of Health Behavior. 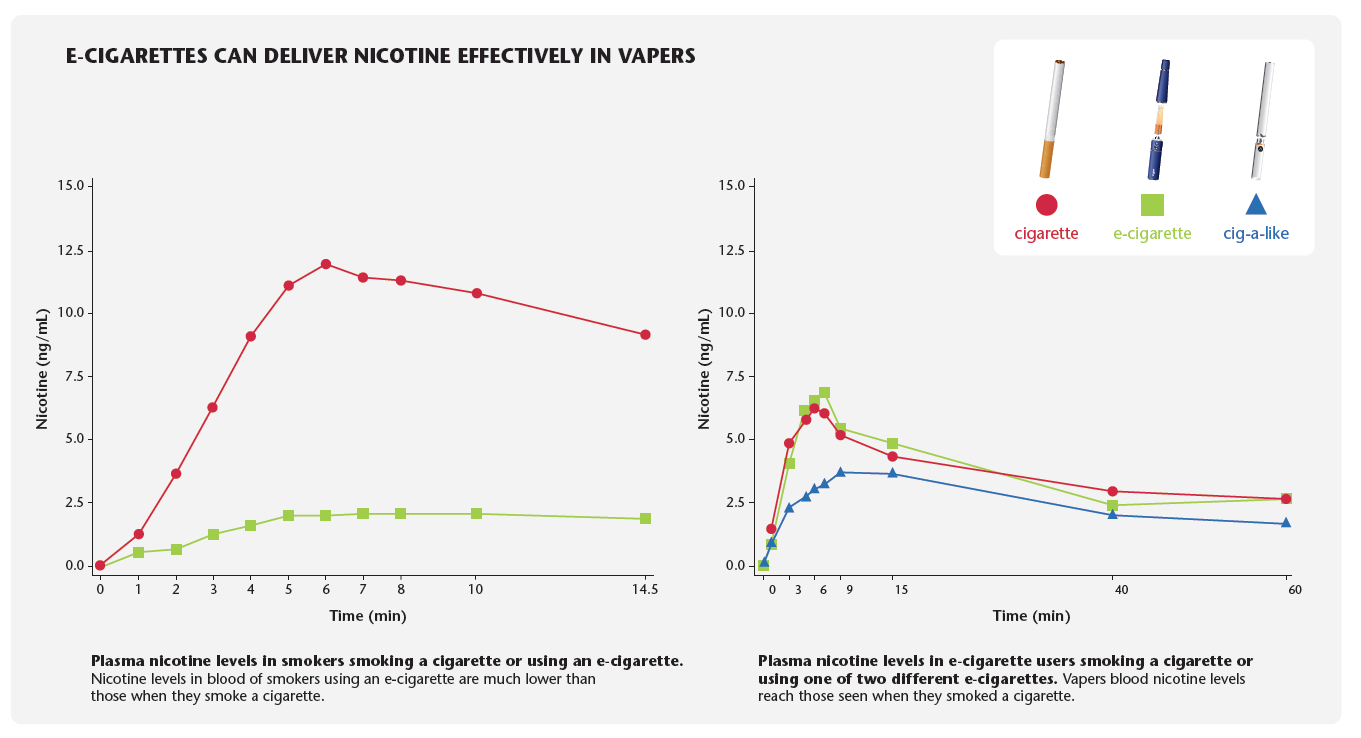 In this study, scientists studied changes in blood nicotine from volunteers who used both cigarettes and e-cigarettes. The results revealed that nicotine delivery from e-cigarettes differs, according to the type of e-cigarette, who uses them and how.

'Our results demonstrate that e-cigarettes are effective at delivering nicotine during brief use periods and new-generation devices are even better at it,' says Fearon. 'However, elevation of blood nicotine levels during e-cigarette use was greater in experienced vapers compared to e-cigarette naïve smokers and under more real-world conditions, ie when the volunteer controlled how they used them.'

Participants in the first study were cigarette smokers who were familiar with but not current users of e-cigarettes. They first smoked a typical cigarette for 5 minutes by taking a single puff every 30 seconds. After a 15-minute break, they smoked cigarettes freely for an hour. At specific time points during both smoking periods, blood samples were taken and participants were asked to rate how much they would like a cigarette. After two days, the procedure was repeated but with a Vype vPro ePen e-cigarette (a closed modular system).

For these inexperienced (in e-cigarettes) smokers, e-cigarettes delivered less nicotine than conventional cigarettes: During the 5-minute defined puffing period, mean peak nicotine concentration from the e-cigarette was significantly lower [at 2.5ng/ml] than for a regular cigarette [13.4ng/ml], although the time to reach it was similar.

Participants in the second study were current vapers who occasionally smoked cigarettes. To start with, they smoked a single cigarette freely for 5 minutes; blood samples were taken at specific time points before, during and after. The participants were then given Nicolite (an old-style cig-a-like, non-rechargeable first-generation e-cigarette) to familiarize themselves with and, after two days, the procedure was repeated but with a second-generation e-cigarette, a Vype vPro ePen. After two days, the procedure was again repeated.

These results demonstrate that the e-cigarettes, especially the newer models, can effectively deliver nicotine to experienced users. The results also suggest that the experience of study volunteers needs to be considered when planning and executing these kinds of studies to ensure the reliability of results.