E-cigarettes are believed to be substantially reduced risk compared to cigarettes, and the simple composition of the vapour compared to that of cigarette smoke is an important factor in this.

‘e-cigarettes have proven hugely popular, but one size does not fit all, which is why we are developing a range of innovative tobacco and nicotine products, in addition to e-cigarettes, to give consumers a greater choice of less risky products,’ said Dr Ian Fearon, Principal Scientist, at British American Tobacco.

glo iFUSE is a patented novel tobacco product that combines e-cigarette technology with carefully selected tobacco.  When the device is used, a heated coil warms an e-liquid to create a vapour that is drawn over a bed of blended tobacco with every puff.  The aerosol cools from around 35ºC to 32ºC as it passes over the tobacco, and the resulting energy exchange draws tobacco flavours from the tobacco into the vapour.

Sensory testing confirmed that the tobacco flavours were detectable and a comprehensive chemical comparison revealed that the vapour produced was almost indistinguishable from the parent e-cig vapour, which suggests that the tobacco blend is not adding any toxicants.

The chemical comparison was made between the vapour produced by glo iFUSE, a commercial e-cigarette Vype ePen and a 3R4F reference cigarette.  Up to 113 compounds of interest were targeted by advanced chemical analyses.  Among them, twenty nine compounds were measured  on a per puff basis for all three aerosols.  A reduction of at least 98% for all 29 compounds was recorded for both glo iFUSE and Vype ePen, compared to the reference cigarette. 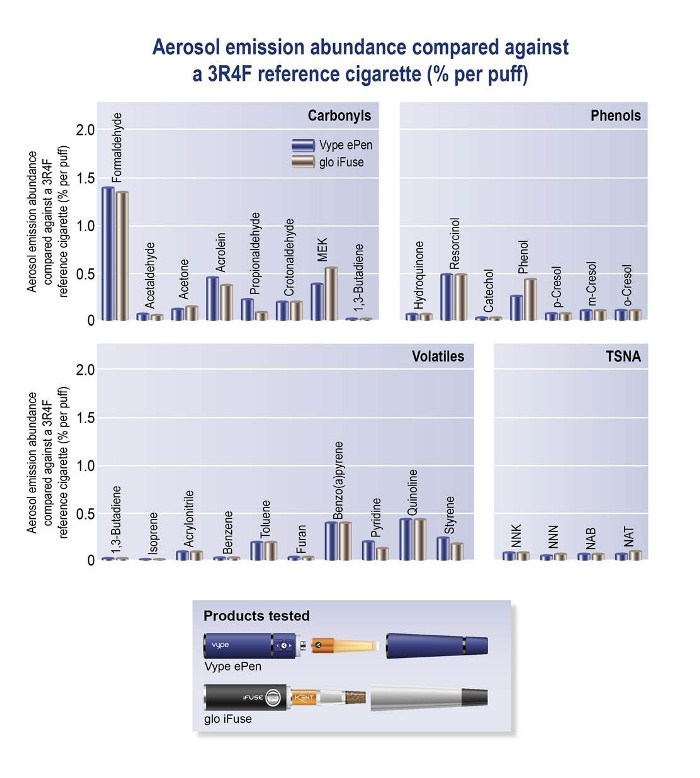 There were small amounts of some aldehydes, semi-volatile compounds and phenolic compounds present in the aerosol and negligible amounts tobacco-specific nitrosamines compared to the reference cigarette.  In most cases, the vapour produced by the hybrid product, glo iFUSE, was indistinguishable from that produced by the e-cigarette.