Scientists at British American Tobacco have proposed a new scientific framework that could be used to assess the reduced-risk promise of the myriad of innovative nicotine and tobacco products currently being developed.

A renaissance in tobacco and nicotine has seen the advent of high-tech gadgetry and technology that requires fresh eyes to help ensure that these products deliver reduced-risk potential. Products like snus, vapour or electrically-heated tobacco products, and electronic cigarettes are all believed to have the potential to present substantially less risk than conventional cigarettes.  Public Health England, for example, based on early scientific findings and the views of an expert group, recently concluded that, compared to cigarettes, electronic cigarettes are about 95% less harmful(1).

The new assessment framework employs a four-stage process that uses lab-based and clinical tests along with real-world observations of individual and population perception and use.

‘We propose that this assessment framework will help us build the required evidence base to demonstrate that novel tobacco and nicotine products can deliver a net population health gain in comparison to cigarette smoking,’ Dr James Murphy, Head of Reduced Risk Substantiation at British American Tobacco told delegates at the Tobacco Science Research Conference (TSRC), in Naples, Florida in September this year. 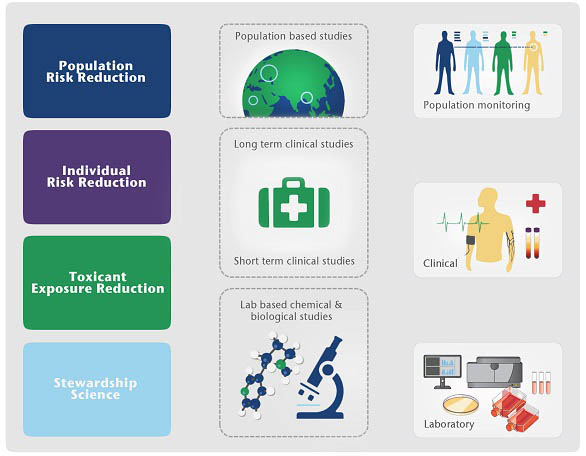 The first step is the characterisation of the product, including laboratory based testing.  This is followed by clinical testing to determine toxicant reductions measured in the laboratory are observed in consumers when using these products. Then the testing moves into the real-world use to determine what impact, if any, this reduction in toxicants will have on a person’s individual risk and also on the collective risk of the population using the products.

The protocol may be new, but the scientific legacy on which it is built spans many decades.  ‘Our scientific heritage means that we had many years of research to draw on when developing this framework,’ says Murphy.  ‘Since the release of a landmark report by the US Institute of Medicine in 2001, which described a scientific basis for tobacco harm reduction, we have worked hard to make their theoretic scientific assessment framework a reality,’ he said.

This framework has evolved from a prototype framework developed in the course of work to develop a reduced-risk combustible cigarette.  Scientists have spent several years researching the nature of tobacco smoke, identifying key toxicants and developing technologies to reduce toxicant levels in smoke.  Laboratory tests showed that these technologies could successfully reduce levels of some toxicants in smoke and clinical testing revealed that smokers’ exposure to these toxicants was also reduced.  But in the case of cigarettes, the reduction in toxicants did not prove significant enough, at least in the shorter term, to be meaningful in terms of health risks.

Innovative new tobacco and nicotine products, by contrast to modified cigarettes, have significantly reduced toxicant levels.  ‘We have observed reductions of 90% and more in the levels of certain toxicants present  in these new tobacco and nicotine products and these are manifesting reductions when the aerosols are applied to in vitro tests, which can mimic some key disease processes and endpoints.  These early stage results demonstrate that in comparison to reduced toxicant prototype cigarettes, these new products have a greater potential to demonstrate disease relevant changes in humans – tests that we plan to do over the next 12-18 months’, said Murphy.

With all of the major tobacco companies actively involved in next generation products, the key to demonstrating the reduced-risk potential of these products will be agreeing on testing approaches. ‘This is a great opportunity for the industry, regulators and academia to come together and agree on standards, testing protocols and scientific peer review, in the same manner other industries have done to support emerging and new product regulations’, said Murphy.

This research was presented at TSRC, in Naples Florida, September this year and published in Recent Advances in Tobacco Science (2). For a list of all our presentations at this years TSRC click here.