RIP bands are designed to make a cigarette go out if it is not being actively smoked. Previous studies have shown a significant increase in levels of biomarkers for a few polycyclic aromatic hydrocarbons (PAHs) in smokers of RIP cigarettes, although the toxicological implications of these increases are currently unknown (June et al. Tobacco Induced Diseases 2011, 9:13 ).

RIP bands are like speed bumps’ placed on the paper along the length of cigarette. They are made of 5-6mm wide bands of low-permeability biopolymer coating designed to make the cigarette go out if it is not being smoked. It is difficult for oxygen to diffuse through these bands, which impacts the temperature inside the cigarette and reduces its tendency to smoulder.

There has been little detailed study of how RIP bands affect temperature distributions inside a burning cigarette. Now, for the first time, research by the Zhengzhou Tobacco Research Institute of Chinese National Tobacco Company and British American Tobacco reveals that RIP bands cause at least two significant temperature changes. 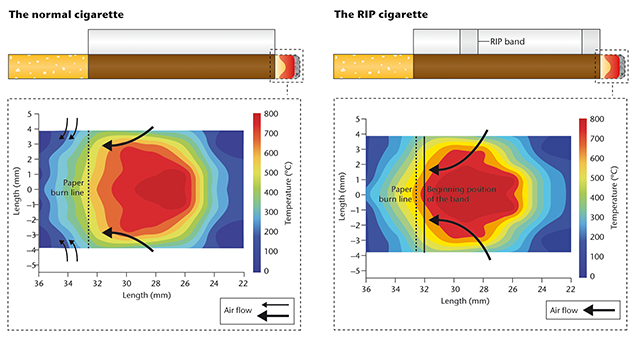 Contrasting burning temperature between a normal cigarette and a RIP cigarette at the RIP band.
View full image.

Using fine thermocouples, the researchers systematically measured temperature profiles within the burning tips of an RIP cigarette and a regular cigarette without bands but otherwise identical. Measurements were taken while they smouldered and then during a 2-second puff using a smoking machine – through an RIP band in the case of the RIP cigarette. Using these measurements, researchers digitally constructed a series of temperature maps, and calculated the corresponding volumes of different temperatures (burn volumes) inside the burning tips. These were compared over time for the two types of cigarettes.

Before the puff (while smouldering), the two types of cigarette burned in almost the same way until the paper burn line approached the RIP band. However, the central region of the RIP cigarette had a lower temperature and reduced burn volume some 20 seconds before the edge of paper burn line reached the RIP band, indicating that the RIP band, restricting oxygen availability from the unburnt paper direction, was able to suppress smouldering well ahead of the approaching burning tip.

Halfway through the 2-second puff, which is when airflow is at its highest, the temperature map was markedly different for the RIP cigarette: there was a lower average burn rate through the band due to a lag in reaching peak temperature, which continued at the end of the puff.

The researchers suggest that this difference may be due to a change in the path of air influx brought about because the RIP band carries more and denser material than a normal cigarette paper and, even after burning, the band still maintains a higher resistance to air flow than non-banded cigarette paper.

Further research will be required to determine whether the change in temperature distribution of RIP cigarettes, as revealed by this work, influences smoke composition in a way that explains the above mentioned biomarker increases in PAHs.

Nevertheless, the random distribution of RIP bands means that most puffs on an RIP cigarette will occur in non-banded areas. However, smoking into RIP bands might have a bigger influence on the overall cigarette smoke composition if smokers take a bigger puff through the bands in order to prevent the cigarette from going out, says Lead researcher Dr Chuan Liu of British American Tobacco.

The latest research is published in Thermochimica Acta