A research review by scientists at British American Tobacco suggests that the regulatory functions and inherent stability of microRNAs make them suitable biomarker candidates for early detection of the molecular and genetic changes associated with smoking related diseases (Biomarkers Med. (2012) 6(5), 671–684 ). 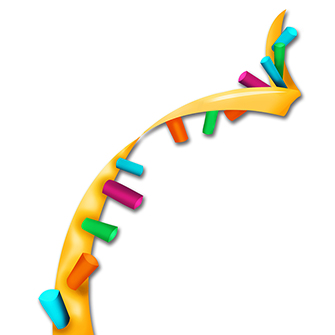 MicroRNAs (miRNAs) are non-coding RNA molecules that play key roles in regulating gene expression. They are involved in a wide range of biological processes such as cell cycle control, apoptosis and several developmental and physiological processes.

Chronic cigarette smoke causes various molecular and genetic changes in the respiratory tract and is a high risk factor for such smoking-related diseases as lung cancer, chronic obstructive pulmonary disease (COPD) and cardiovascular disease. The potential of miRNAs as effective biomarkers of biological effect is borne out by the results of several studies demonstrating that miRNA expression patterns differ in diseased and normal tissue. miRNAs also play a vital role in inflammation, which contributes to development of these diseases, and serve as key regulators of immune response.

It is cancer in particular in which miRNAs have so far shown the most promise as biomarkers. Some miRNAs act as oncogenes, some play important roles in tumour invasion and metastasis, while others suppress tumours. Research shows that cigarette smoke impairs the regulatory function of a variety of miRNAs in all stages of lung cancer formation, but that resulting changes in miRNA expression only become irreversible after exposure to high doses of smoke for some time.

Changes in miRNA expression can indicate not only the presence of a tumour but also its origin and stage of development. “By measuring miRNAs in several types of body fluids, it is possible to robustly discriminate between patients with disease and healthy controls, and reliably identify patients with good from poor prognosis. Additionally, miRNA expression changes are identified at early stages of disease development . Therefore the potential of miRNAs as biomarkers of biological effect appears extremely promising,” says Dr Chris Proctor, Chief Scientific Officer at British American Tobacco. In addition, miRNAs – unlike messenger RNAs (mRNAs) – are highly stable in tissue and blood, are resistant to RNA degradation, and can be found in blood, saliva and urine, enabling easy, non-invasive detection.

“The changing profile of miRNA expression in diseased and normal tissues, the dysregulation of a variety of miRNAs throughout all stages of pulmonary carcinogenesis by cigarette smoke, non-invasive sampling methods and the reversibility of miRNA expression on smoking cessation reported indicate the relevance of miRNAs as potentially ideal biomarkers of biological effect,” says review author Anisha Banerjee of BAT.

The researchers note that further studies are required to identify the miRNAs most relevant to specific diseases and to develop robust isolation and detection methods.

The maturation of miRNAs is mediated by the two RNase III endonucleases, Dicer and Drosha. In the first step, the microprocessor complex (Drosha and DGCR8) mediates the nuclear processing of the pri-miRNAs into stem-loop precursors (pre-miRNA). The nuclear export of the precursors is subsequently mediated by exportin 5. In the second step, the pre-miRNA is cleaved in the cytoplasm by Dicer into the mature miRNA and incorporates as ssRNA into the RISC complex. This complex directs the miRNA to the target mRNA, which leads either to translational repression or degradation of the target mRNA. miRNAs are also localized to the nucleus, where they may regulate transcription. 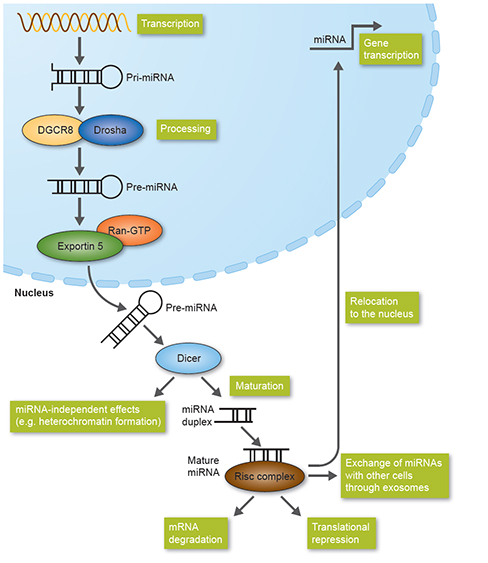