Exposure to cigarette smoke has been found to induce the expression of osteopontin in endothelial cells for the first time. Osteopontin is a component of bone and is involved in bone formation and calcification. Endothelial cells line the entire cardiovascular system and have a distinct function that is thought important to vascular health. The results of this study therefore could have important implications for our understanding of the role of smoking in cardiovascular disease. 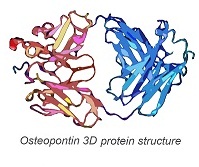 The results of this study indicate for the first time that the endothelium is a potential source of smoke-induced inflammatory osteopontin protein and this may play a role in cardiovascular diseases. The results are published in BMC Cardiovascular Disorders 2012.

The study, which was conducted in collaboration with scientists at R. J. Reynolds Tobacco Company, revealed that exposure of endothelial cells to cigarette smoke particulate matter induced the expression of osteopontin at both the gene and protein levels. The mechanism involved in this response seems to involve oxidative stress since it was diminished by pre-treating the cells with the antioxidant ascorbate.

The functional effects of osteopontin are determined not just by its expression but also by its cleavage by various enzymes into functionally diverse fragments. The matrix metalloproteinase family of enzymes, in particular MMP-3, is known to cleave osteopontin. Given this, the induction of expression of MMP-3 in endothelial cells exposed to cigarette smoke extract was examined and found to be enhanced in a dose-dependent manner following smoke exposure. The effect is not mediated by oxidative stress since it was ascorbate insensitive. This highlights the fact that oxidative stress may be differentially involved in the production of different osteopontin fragments which may have different functions.

To support these laboratory findings, the group conducted a study to evaluate the effects of short-term smoking cessation on biomarkers. Serum samples from smokers and people who quit smoking for 5 days were evaluated and osteopontin levels measured. The blood osteopontin levels in the people who temporarily quit smoking were significantly reduced compared to their levels prior to quitting, which is in accordance with the commonly-observed reduced degree of vascular inflammation seen in those who quit smoking. This strengthens support for the proposed role of osteopontin as a factor in smoking-related  cardiovascular disease.

Osteopontin may therefore be useful as a new biomarker of biological effect that is responsive to smoking cessation even in the short-term and may find utility in studies of the effects of
modified cigarettes with reduced toxicant levels, though more research would be needed to validate this.

Dr. Ian Fearon, study lead at BAT, said: ‘This study provides an important advance in our knowledge of how cigarette smoking affects smoker’s blood vessels and can cause heart disease. With this information we can begin to unravel further these effects and also potentially use osteopontin as a marker of the effects on smokers of modified cigarettes with reduced toxicant levels or other potentially reduced-risk tobacco products. This could be a very important step for us as we try to develop and test products which pose substantially lower health risks than conventional cigarettes.’